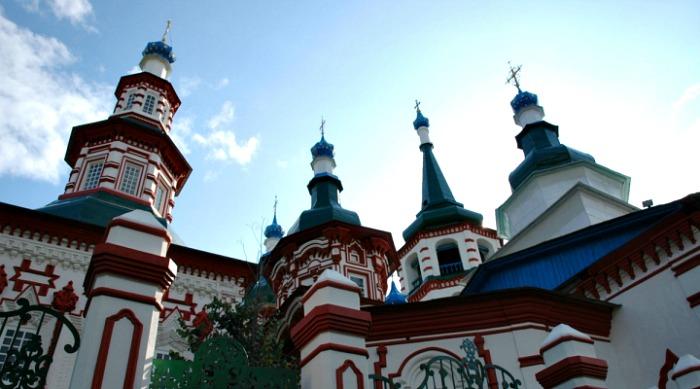 Irkutsk is one of the largest Siberian cities. It was founded in 1661 by Yakov Pokhabov. People from all over the world go to Irkutsk to experience the real Siberian winter, see the unique architecture of the wooden houses, and to visit the place that the 'Decembrists' were exiled as well as to see the “The Pearl of Siberia” – Lake Baikal.

Lake Baikal is the largest and most ancient lake in the world. It is the only place on earth where you will find fresh water seals. It has an average depth of 744.4 meters and its maximum depth is measured at 1,642 meters (1 mile deep). It is 636 km in length and is 79 km at its widest point. Lake Baikal is frozen from January to May. Lake Baikal is a UNESCO World Heritage Site. Read more about Lake Baikal.

On the 14th of December 1825, Russian army officers and some other representatives of Russian aristocracy together with nearly 3,000 soldiers marched to the Senate Square in St. Petersburg. It is here where the first armed uprising against autocracy and serfdom took place in Imperial Russia. The protesters known as the 'Decembrists', wanted the Senate to carry out a number of democratic reforms in the country. The uprising was severely suppressed and the five main leaders were executed close to the current location of the St. Peter and St. Paul Fortress on the banks of the Neva River in St. Petersburg. Other members of the uprising also received punishment. Most of protestors were deprived of their rights and exiled to Siberia, including to some provinces of Irkutsk.

The first Decembrists arrived in Irkutsk in the summer of 1826. They were given hard labor, or forced to work in factories or prisons. As the Decembrists were the Russian nobility and intelligentsia, they made a considerable impact on the cultural, historical and political development of the eastern Siberian region. In their spare time, the Decembrists taught the younger generation and the peasants maths, languages, medicine, natural sciences and music. A particularly important role in the life of Irkutsk society was played by Grand Duke Sergey Volkonsky, a veteran of the 1812 Great Patriotic War, and one of the leaders of Decembrists’ Society. Volkonsky was sent to a village near Irkutsk, where he cultivated the fields with the peasants teaching them advanced farming methods. His house in Irkutsk became a center of cultural and spiritual life. Among other famous Decembrists’ houses in Irkutsk, there is the house that belonged to Grand Duke Sergey Trubetskoy and his wife Yekaterina Trubetskaya (who was the first woman to leave to follow her husband to Siberia).

The Decembrists also made a great contribution to the history, geography and political ideas of Irkutsk and Siberia in general. Nowadays, people from all over the world come to Irkutsk to learn about the destiny of the “state criminals” who dared to rebel against the monarchy in December 1825 and were exiled to Siberia. Most of their houses are located in the center of Irkutsk.
Send request All excursions
3 hours | $70 per person