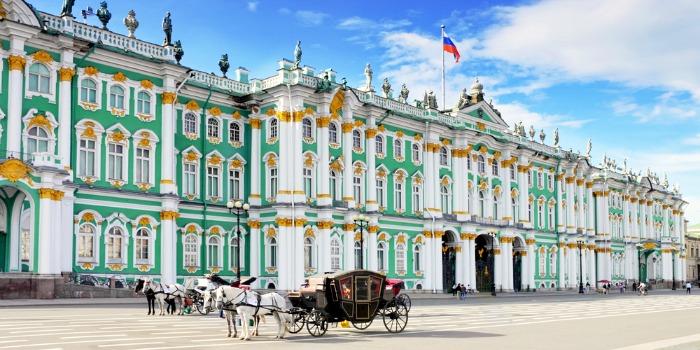 One of the largest museums in the world, the State Hermitage, occupies six magnificent buildings situated along the embankment of the Neva River. The main building is the Winter Palace which used to be the official residence of the Russian Tsars. To see all the exhibits treasured in the Hermitage is just impossible – it has been calculated that, if you spend a minute at one item and spend 8 hours in the Hermitage daily, it will take you almost 15 years to view all the museum’s exhibits! To visit all 350exhibion rooms would entail walking distance of about 10 km (over 6 miles).

The Hermitage history starts with Catherine the Great when she began purchasing famous artworks. As her collection was growing through the 1760s, Catherine commissioned the French architect Jean – Baptiste Vallin de la Mothe to build an extension to the Winter Palace. The building was completed in 1769. In the tradition of Peter the Great and Empress Elizabeth, she called the structure "my hermitage". In 1770 she commissioned another major extension. Built in two phases, by Yury Velten, this expansion was known as the Old Hermitage.

The collection was growing and enriched with other artworks such as from Greek culture. The imperial Hermitage was proclaimed property of the Soviet state after the October revolution of 1917. The range of its exhibits was further expanded when private art collections from several palaces of the Russian Tsars and numerous private mansions were being nationalised and then redistributed among major Soviet state museums.

The collection of Western European art, numbering over 600,000 items, is considered to be one of the finest in the world. It has excellent examples of Italian High Renaissance art, French Impressionists, fabulous treasures from Siberia and Central Asia, Egyptian and Classical antiquities, Persian and Chinese masterpieces among many others.

Once you are in the Hermitage, walking around the exhibition halls, you will feel as if you travel through time and epochs. You will admire the richest collection of ancient and early medieval items, works of art from Ancient Greece and Rome, fabulous treasures of oriental culture and wonderful European art.

We hope that you will remember your visit to the State Hermitage museum as one of the best experiences of your life.

Please note, you can stay on and admire the collection after your guided excursion.
Send request All excursions
$80per person
4 hours

You will feel like a real arctic pioneer riding a snowmobile on the frozen lake of Onega, the second largest in Europe, through the surreal beauty of frozen desert covered with fluffy Russian snow – and there will be plenty of it, for sure, as well as unforgettable memories of your amazing holidays in the heart of the Russian North! Itinerary Dates & Prices Book now
Go Russia on Tripadvisor
Trustpilot
Atol protected IPP Insurance
Copyright © 2005-2020 GR Travel Group Ltd., Tel.: +1 (631) 621 53 25, email: info@justgorussia.com
Join our newsletter Go